Remember Accounting 101? Debits, Credits and all that financial stuff?  18th Century account books also used that same method of accounting for goods and services.  I sell you this, you pay me that.  The tailor's book of Mr. Gould kept track of his transactions in a very effective and easily understood way. 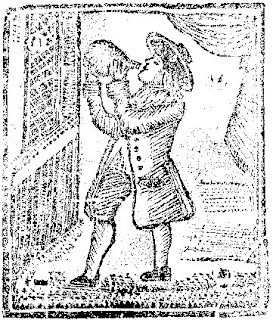 Mr. Gould used a plain unlined notebook, the left side for the name of the customer, the date of the transaction and the cost for goods and services provided, listed in pounds (£), shillings and pence.

The right side of the notebook was used to note payment, both partial and full and the dates those payments were made, also in pounds (£), shillings and pence.

The totals on each side were balanced, though it was not unusual to see payments made in a series of entries over time. 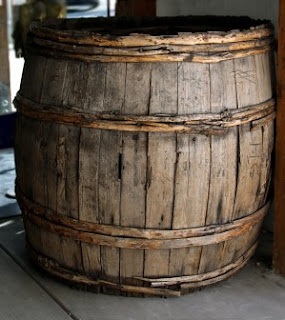 What makes the entries fascinating, on so many levels, is what they can teach us about 18th century life, not only from the clothing/textile perspective, but from the relative value and measures of commodities and other services used in payment.  Cash, of course, is always good, and could consist of colonial money, British currency and the foreign coinage of many nations, especially the Dutch and Spanish coins.   But it is the payments using methods other than cash that are the most interesting for us.  (Mr. Gould probably liked the cash!)

Looking at the credit side of the account book we see that Mr. Gould was paid in the following manner.

Mr. Gould had a consistent charge of 7 £ for the making of a pair of breeches.  Would you be willing to make a pair for a 1.4 gallons of rum?  How many codfish in a kintle?  Any ideas?