What gown style is right for me?

In our area we reenact the period from 1770-1783.  Will one gown work for us?  Probably, but that question and answer requires some thought and some research.  Here's the thing, your clothing doesn't have to be the latest in fashion, by the same token, you shouldn't be wearing styles that haven't been invented yet.  (you can go back but not forward) And frankly, it's the latter that needs to be addressed as we take steps towards greater authenticity.

The basic rule of dressing for 18th century reenactors has essentially been -- stomacher front gown for French & Indian War and a center front closing gown for Rev War.  In our humble opinion we need to be a bit more specific than that and base our choices on documented research not reenactor tradition.  The busy bees at the Hive have been pondering this as of late and are trying to nail down a date when the front closing gown started to take hold.  Examination of  artwork would suggest somewhere around 1775-1778.

This first image by Anna Frankland Lewis is dated 1774.


This is her version of the "Dress of the Year" which would make it in the forefront of fashion in 1774.  It is still a gown with an open front, with probably gauze or lace trimmings and a vertical decoration running down either side of bodice center fronts. Make note of the fact that this still a fashion plate, not a real gown.

This next watercolor by Anna Frankland Lewis is the earliest representation of a closed front gown that we have yet found and it is dated 1775. 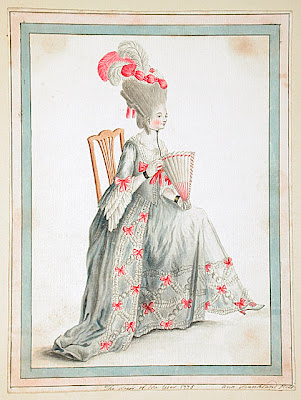 This is Anna's interpretation of either a fashion plate or image from an almanac. You can clearly see the closed front bodice of this gown.  High fashion in 1775- in silk. 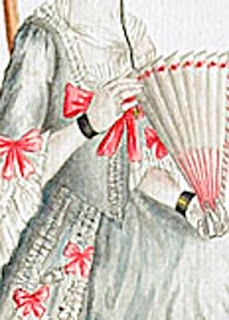 This blown up version shows clearly the gown meeting in center front, with the same vertical trimming at center front as the earlier gown. The aesthetic has changed.  This is a pretty dramatic change for a gown style that has been in place for many decades.  It is daring, revolutionary and cutting edge.

How long did it take for this fashion to reach down into everyday life of the ordinary woman?  Right now in 2011 it takes about a year after seeing something trendy in New York City to see the same fashion trend in small town Massachusetts and we have the internet!  and magazines! and TV!

Let's look at the questions this all brings up.

Was there a transition style from one to the other?

Where does the so called zone gown fit into the equation?

How quickly does the front closing gown become the style of choice in the colonies - especially for the poor and middle class?

How did one learn how to make this new style?

So what are you finding?  When are you seeing center front closing gowns appearing and when are they being worn by the masses (Colonial & English women)?   Your thoughts?

The buzzing bees
Posted by The Hive at 5:31 AM