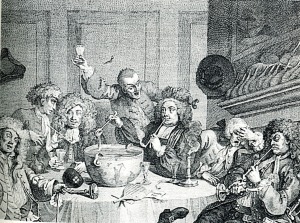 We hope everyone enjoyed Tavern Keeper Sabra Welch's lecture on the business of running a tavern.  As promised, here is her bibliography as well as a couple of punch recipes for you to try.

It's Friday -- get out your muddler and punch bowl and enjoy happy hour 18th century style.  And if you are going to gamble, remember to do so in private! 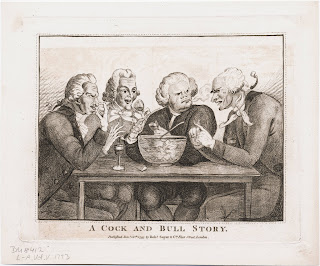 Punch Recipes
These receipts are taken from The Cooks and Confectioners Dictionary, by John Nott printed in England in 1723.
To make Punch Royal
Take three pints of the best brandy as much spring-water, a pint or better of the best lime juice, a pound of double refined sugar. This punch is better than weaker punch, for it does not so easily affect the Head, by reason of the large Quantity of Lime-juice, more than common and it is more grateful and comfortable for the stomach.
Note: This punch may be too tart for modern tastes but remember that punch making is an art.  Some experimentation may be in order to adjust the level of sweet or sour…. or even the ratio of spirits to water.   It is also, according to Mr. Nott, quite strong… so either have a designated driver if you serve this at a party… or plan for overnight guests.
Punch for Chambermaids
Take a quart of water, a quarter of a pint of Lime juice, squeeze in also the juice of a Sevil Orange and a lemon, put in 6 ounces of sugar. Strain all through a strainer 3 times til very clear, then put in a pint of brandy and ½ pint of white wine.

Note: Seville oranges or sour oranges are available from December to February.  If you are making this punch at other times of the year, use orange juice and increase the amount of lemon juice you add to keep the correct amount of sourness to the punch.  Start by adding an extra table spoon or two of lemon juice, taste and adjust if needed 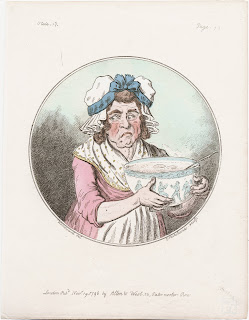 It's hard to believe that this Sunday is the last Hive of the 2012 Winter season, though we will be announcing additional workshops and events for later this year.  We hope you all enjoyed this season's line up and being the busy bees that we are, have already started to plan 2013's programs.

Important news regarding this Sunday's Hive.  We have moved the start time up an hour and will be starting at noon and running till 3.  Our program will then be followed by another presentation, that you are also welcome to attend, sponsored by The Friends of Minute Man, on the archeology of the Park, including things relating to taverns.  We will be at the Minute Man Visitor Center on Route 2A in Lincoln, and NOT in our usual location in Concord.  (Seating is open on a first come first serve basis, we are not taking reservations)

Our schedule of speakers will be as follows:

3pm -  4pm Town and Country - An Exploration of Archeological Collections by Alecia Parisi & Emily Murphy (Sponsored by the Friends of Minute Man) http://www.friendsofminuteman.org/

And don't forget to turn your clocks ahead on Saturday night and join us at NOON at the Minute Man Visitor Center on Route 2A for our final Hive of the season.

Any questions, please contact stephzsmith@gmail.com
Posted by The Hive at 7:31 AM No comments: