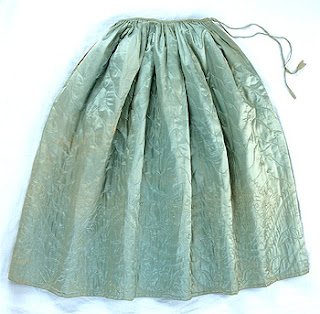 Have you ever thought about making a quilted petticoat?  You should!  It’s one of the most ubiquitous women’s garment in the 18th century.  They survive in large numbers – it would seem as if almost every historical society in New England owns one. Mentioned repeatedly in diaries, inventories, runaway ads and merchant advertisements, they come in callimanco, tammy, stuff, and silk just to name a few.

Well, here’s you chance.  Come join us on Saturday (January 19) in Concord, MA and learn how to make a quilted petticoat.  We’ll be working together to assemble a petticoat and begin to quilt it.  Everyone will get to work on each step, from laying out the layers, to basting them, to applying the pattern to practicing their quilting technique.

Each participant will also assemble a mini-quilt of their own that they will be able to take home as a reference.  At the end of the class, we’ll pull a name out of the hat, and that participant will have the opportunity to buy the quilt we constructed during the class.

We only have a few spots left, so if you are interested email us at hive workshops@gmail.com

What a great project for a cold, snowy winter!!!

Cost of workshop: $60
To register: hiveworkshops@gmail.com