The Rebels & Redcoats Event at Old Sturbridge Village and Battle Road have become my bellwether on where we stand on our pursuit of greater accuracy of impression.  OSV is always interesting since the standards are "suggested" rather than actually enforced by inspection and there are groups in attendance for which Battle Road standards would be a real stretch, though some of these units have made real progress. 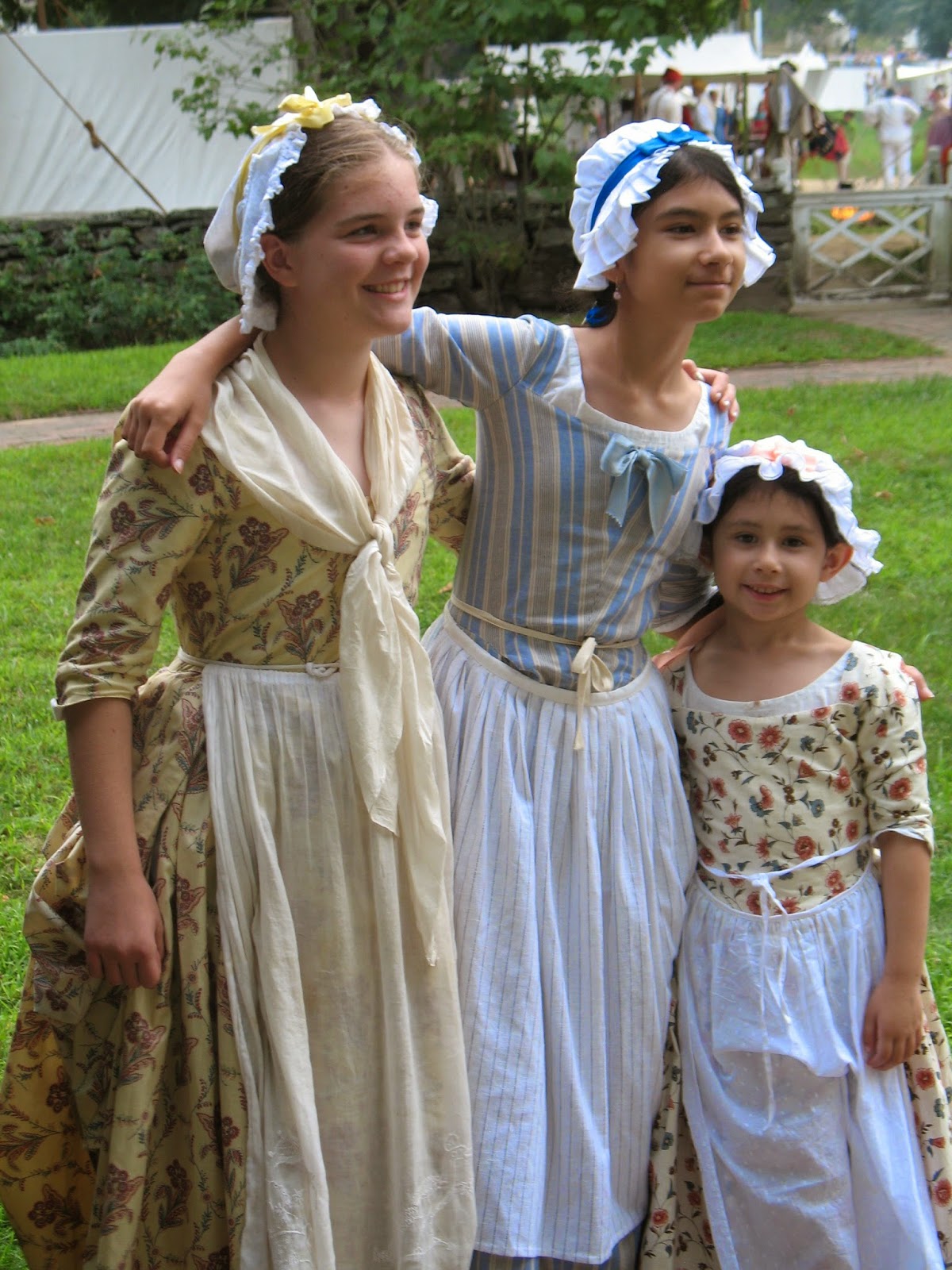 I am pleased to report that the ladies pretty much aced it!  Lots of gowns, stays, good fabrics, appropriate hats, bonnets and caps and the vast majority had good repro shoes.  Now, that's not to say there weren't the usual offenders -- the sleeveless bodices, cabbage rose petticoats, Simplicity gowns worn without stays, but I am happy to say that the numbers were fewer and were overshadowed by the good impressions.  Ladies - I couldn't be prouder - you rock!  And your humble beeness was busting with pride every time one of you introduced a newbie and asked when the next Hive was because your friend was eager to start work on her first pair of stays.  Yes, leading by example works -- it takes time, but our Hivettes are making a difference.  Oh, and by the way, thank you for putting forth the effort to make your daughters look good too.  That was the icing on the cake.

However…..what is up with you men????? Some of you look like you were dressed to attend a "Colonial Bum Convention".  And this applies to the militia types AND men in uniform on both sides.  Grading on a curve, I give you a C-. The major problem was sloppiness of impression.  Franky, neither George would have been pleased with the appearance of their armies.  This is not to say that there weren't great impressions, there were, and we'll always cut some slack for the newbie in the loaner clothes.  However, the overall attention to detail, or lack thereof, brought down the level of accuracy of the entire event.  And reason this writer has her stay cord in a knot about this, is that these are issues that are relatively easy to fix and ones that we have addressed at the Hive on numerous occasions.

Here are some of the major issues……

1. Ill-fitting clothing was the biggest problem.  So many pairs of breeches looked more like bloomers and countless coats just hung like rags on their wearers' bodies.  No doubt they are pretty comfy, but not period correct.  Bad fit looks slovenly and extremely un-18th century.  And this wasn't just the case of the newbie in borrowed clothes - people who have been in the hobby since the beginning of time were some of the worst offenders here.  We've run clinics on clothing fit multiple times at the Hive -- there is help available, you just have to show up.  Oh yeah, and some of you still don't seem to own a sleeved outer garment.  And please explain how a certain CL unit shows up to battle with nary a coat on one of the mildest days this summer?

2.  Shoes!  Ok, I get it, repro shoes aren't cheap.  Oh, I know, you have bad feet.  Leather soles are slippery on the battlefield.  But black sneakers? Really?  When did black Nikes become de rigeur for reenacting? And if you insist on forgoing a decent pair of repro shoes, how about you at least cover up those clodhoppers with a pair of gaiters that fit and are appropriate for your impression.  Gaiters that flop around over your modern shoes just bring more attention to the fact that your shoes look really bad.  And I just love the photo posted on Facebook that shows a kneeling solider. What is front and center -- a great view of the waffle sole of his modern hiking boot.  Don't let anyone kid you -- people notice your shoes!

3. Proper Neckwear.  One of the easiest things - but so few get it right.  Neck cloths, bandanos, neck stocks --get that neck covered and close up those top buttons of your shirt.  In addition, if you are wearing neck covering, make sure that it is actually covering your neck.  Almost every group had a problem with this - and many of them were people whose kits are otherwise pretty good.  We did a program on neckwear at the last Hive -- I'll share parts of that presentation on this blog in the near future.  Easy fix, low cost.  There is tons of artwork out there showing how neckwear of all varieties is worn. Take a stroll through the Lewis Walpole library website sometime, you'll be enlightened.

Note: I'm going to stay out of the facial hair wars.  It's an issue that only peer pressure or enforcement of standards will fix.  So boys - that's your battle and you need to keep waging it!

4. Finally, here's one that doesn't cost a sou to fix -- POSTURE! It was most obvious when I watched the men march off to battle. For heaven sake, stand up straight, you look like a pack of Neanderthals rather than the a formidable 18th century fighting force.  In the 18th century, posture said almost as much about you as did your clothing. How you moved, how you stood, was hugely important.  Just refer to your manual of arms - it starts off by telling you how to stand.  No cost, no sewing skills needed, no purchase required -- work on your posture.  It's such a little thing that makes a huge impact.


From Von Steuben's Manual of Arms

He is to stand straight


And firm upon his legs


With the head turned to the right


So far as to bring the left eye


Over the waistcoat buttons;
The heels two inches part;
The toes turned out;
The belly drawn in a little,
But without constraint;
The breast a little projected;
The shoulders square to the front, and kept back;
And the hands hanging down the sides,
With the palms close to the thighs.

So gentlemen, get yourselves to the Hive this winter.  We're planning a whole lot of things just for you.  Yeah, you can stay home and surf the Internet but you will learn so much more by showing up in person, learning from others and being part of a community.

Maybe plan a day to inspect everyone in your regiment and address some of these issues.  Just because your kit was great ten years ago, doesn't mean that it's up to snuff now.  Everyone's impression can use a fine tuning every now and then. And the meantime, listen to your mother, "Stand up straight!"