Creating Civilian Events that is!

Here in Hiveland we were a little surprised with the reaction to the clothing standards put forth by the organizers of the east coast Hermoine events.  For those of you who aren't aware, this summer the recreated ship that brought Lafayette to the colonies in 1780 is arriving at various ports along the eastern seaboard.  At each port events are being organized to have the ship greeted by accurately costumed reenactors.

Personally I think there are several reasons that these standards have ladies' stays in a twist.  Reenactors don't like to be told what to do, especially when it comes to what they wear.  Many are not used to detailed clothing standards.  But I believe the biggest reason this has caused such a kerfuffle is that there are so few civilian events out there and people are afraid of being excluded. 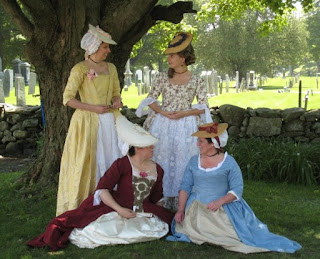 Other than the occasional ball, a ladies tea organized by the host unit at a military encampment or a stroll down sutler's row, there are not a lot of opportunities to put on the finer clothes and do something other than laundry or tending some hunk of meat on the fire.


As a friend said to me once, "Guys need a cast of hundreds to pull off a good event (military that is), you ladies can have a great event with just two of you".   What he meant was you don't need a lot of organizing and a huge complement of people to pull off a good civilian event.  We do them around here quite a bit and I encourage others to do the same.


Want an excuse to wear a French Fashion Plate?  Attend a Mozart opera or concert in kit (be sure to contact the artist director and get permission before you do).  A couple years ago, a group of us attended a showing of Dangerous Liaisons and purchased box seats.  The audience thought we were part of the show and we actually received a standing ovation from the cast!

Have a small dance at a local historic house.  Most historic properties welcome the participation of volunteers. 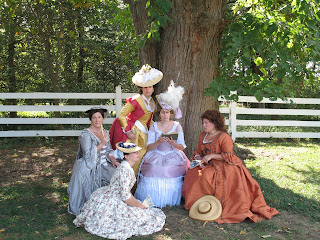 Want to wear those 1780's confections? - plan a post-war/celebrate the victory/end of war event.
Schedule a "renenactor play date" at a local historic site.  Bring your sewing projects and spend the day getting something done.  At the same time you can educate the public on clothing of the period and how that relates to commerce, class, etc.

Do yourself a favor and plan a civilian event this summer.  I think you will find they are fun, low-pressure, and very rewarding!

Next: What does 1780 in New England look like?  Preparing for the Hermoine.