Happy Thanksgiving from The Hive

In the 18th century there was no "Thanksgiving" as we know it today, you know, turkey, stuffing, football.....  Rather, "Days of Thanksgiving" were routinely declared.  And you have to love how they were sometimes, matter of factly, announced in the newspaper, like this example from 1766 -  Lt Governor proclaims a day of Thanksgiving, and by the way, a ship sprung a leak, the mackerel is plenty and there was a ship wreck and everyone died. A stark contrast to today's super-hyped holiday. 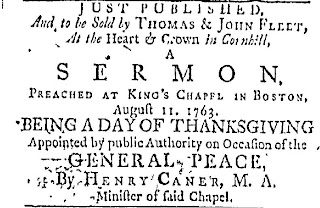 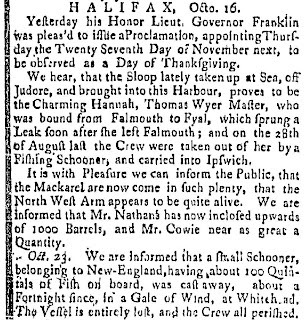 It would appear as things heated up between us and England that Days of Thanksgiving in the Colonies, took on a more focused and important purpose. Take a look at this one by John Hancock in 1774 who includes in thoughts that, "harmony and union to be restored between Great Britain and these colonies". 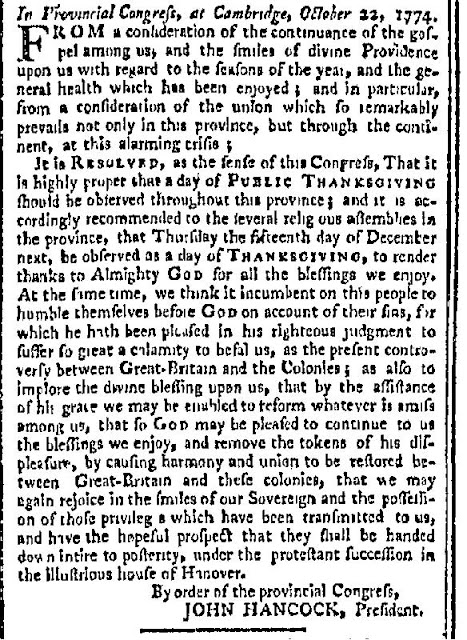 In 1777,  progress during the war was cause for a Day of Thanksgiving

In 1783, a Day of Thanksgiving was proclaimed to be thankful for a "cessation of all hostilities"

So as we launch headlong into the craziness of the holiday season, why not take a minute to reflect on  how our 18th century forefathers and mothers viewed Thanksgiving and be thankful that they left us their words to study and to learn from.
Best wishes from all of us at the Hive and enjoy this Day of Thanksgiving!
Posted by The Hive at 3:57 AM

Email ThisBlogThis!Share to TwitterShare to FacebookShare to Pinterest
Labels: Day of Thanksgiving