Moose on the Loose

Joseph Newell is making a fair number of breeches, and many are generically labeled as "leather", others are deerskin, lambskin, sheepskin, and "moos".  There is also one entry for:


"pare of lambskin and making a pare of drawers and finding thread" at a cost of 4 shillings.

It would appear that drawers were being made of leather as well as linen.  And Mr. Newell is also making gloves for both men and women. He even mentions a pair of leather mittens.

Examining advertisements in period newspapers confirm that there are a wide variety of skins available for a breeches maker and glover to use.


We can also, specifically, document the availability of moose.

But were these skins from local moose?

Well here's yet another example of how research can lead you down side streets.  I was searching the newspapers for any mention of Brookfield (not necessarily relating to moose), and found the following items.

Apparently a moose sighting in the Worcester area was as unusual then as it is today. Enough so, that it made the newspapers both times it happened. And according to the earlier article, moose hadn't frequented Brookfield for 40 years when there was a moose on the loose two years earlier.

They also appear to be that much of an oddity that Bostonians could pay to see one according to this ad:

And if you hadn't ever had the chance to see a moose up close and personal, a description of them could be found in this article on exotic creatures. 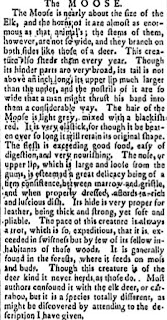 So are you now wondering, as I am, if the skins of the two moose that wandered into Brookfield in 1767 and 1769 ended up on Joseph Newell's workbench??? ....and who got to dine on the moose lips?

..........and is anyone thinking about making "moos" breeches this Hive season?