We were graced with a picture perfect Indian Summer day for our annual Preserving the Harvest program at Minute Man National Historical Park.  Great weather, a steady stream of very interested visitors, along with the contributions of our tireless participants, made for a successful event.  Oh yes, and there was that amazing array of culinary delights that made up the groaning board for nooning!

What makes this particular program so much fun, is that it's a learning experience for us, as well as the public. Participants are tasked with selecting a period method of food preservation, giving it a try, then sharing what they learned at this event.

For those of you who could not join us, our wonderful participants have kindly offered to relate their experience with food preservation techniques with The Buzz at the Hive. To kick off our series on Preserving the Harvest, we'll look at quinces, brought to you by guest blogger, Ruth Hodges. 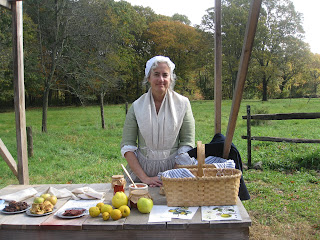 In preparing for Preserving the Harvest, I had a wonderful time poring through several old cookbooks before settling on making quince marmalade from The Art of Cookery Made Plainand Easy by Hannah Glasse, first printed in 1747.  There were a number of things that pulled me toward this recipe even though I had never before made any kind of jelly or jam.  First, I loved the idea that the quince was a common fruit in New England in the 18th century, and now it has nearly disappeared (having been badly afflicted by a blight here in North America).  And being a word nerd, I discovered that the word marmalade, now almost solely identified with the orange variety, comes from the Portuguese word for quince.  So the original marmalades were made from quinces and not oranges!  Finally, I read that quinces ripen in October and November so the timing was perfect for Preserving the Harvest.

I found quinces at a specialty food store in Cambridge, two varieties actually.  One variety looked like a green apple and was from California.  The other was from a small farm in Vermont and was yellow and more pear-like in shape.  And even though the quince is in the same family as the apple and pear, the appearance is pretty much where the similarity ends.  They are very hard and dry, more like dealing with a winter squash when it came to paring, quartering and coring them!  I used both varieties in my marmalade. 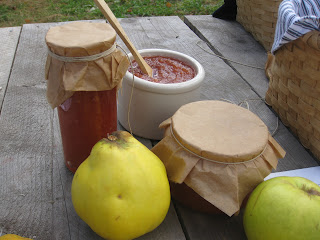 The 18th century recipes are written in a narrative style rather than the list of ingredients and chronological steps we find in modern recipes.  Some of them were a bit difficult to decipher so I ended up going back and forth between recipes and cookbooks to make sure I understood what was meant.  I referred often to Martha Washington’s Booke of Cookery and Book of Sweetmeats because I had an annotated version which I found very helpful in this regard.
There were recipes for both white marmalade and red marmalade.  For white marmalade, you boil the quinces just until they’re soft enough to mash.  The longer you cook the quince, the deeper and rosier its color becomes.  I made the red variety and it was glorious when it cooked down to a wonderful amber red, thick consistency.  It was delicious!

To make Red Marmalade.
Take full ripe quinces, pare and cut them in quarters, and core them;  put them in a sauce-pan, cover with the parings, fill the sauce-pan nearly full of spring-water, cover it close and stew them gently till they are quite soft, and a deep pink colour;  then pick out the quinces from the parings, and beat them to a pulp in a mortar;  take their weight in loaf-sugar, put in as much of the water they were boiled in as will dissolve it, and boil and skim it well;  put in your quinces and boil them gently three quarters of an hour;  keep stirring them all the time, or it will stick to the pan and burn;  put it into flat pots, and when cold tie it down close. 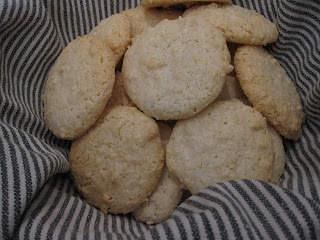 I also made macaroons (mackroons) for our nooning.  This recipe came from Martha Washington’s Booke of Cookery and Book of Sweetmeats, a cookbook that had been handwritten in the 17th century and which came into Martha’s hands in 1749.  The language in these recipes is clearly earlier than in Mrs. Glasse’s cookbook written a century later.  Still, many of the recipes were similar.  I chose to make the mackroons because I love to bake and the recipe was straightforward and simple.  Of course, I “cheated” by buying almonds that were already blanched and I ground them quickly in an electric coffee grinder rather than using a stone mortar and pestle specified in the recipe.  While I couldn’t find the ground muske, I did find rose water in that Cambridge specialty food shop.  The preservation of flowers was common in the 17th century and rose water turns up in many of the recipes for cakes and other desserts.  I learned that rose water is very condensed and a little goes a long way, and according to the editor’s notes, over time it was replaced by vanilla extract for baking in Britain and America.  The two flavors are very different but serve the same purpose in baking.  The recipe called for “a spoonful or 2 of rose water” so I used a tablespoon.  I think next time, I’d reduce that amount to a teaspoon.
~~Ruth Hodges

184             TO MAKE MACKROONSTake a pound & halfe of almonds, blanch & beat them very small in a stone morter with rosewater.  put to them a pound of sugar, & ye whites of 4 eggs, & beat ym together. & put in 2 grayns of muske ground with a spoonful or 2 of rose water.  beat ym together till yr oven is as hot as for manchet, then put them on wafers & set them in  on A plate.  after a while, take them out.  yr oven is cool, set againe & dry ym.


MARTHA WASHINGTON’S
BOOKE OF COOKERY
AND
BOOKE OF SWEETMEATS:
being a Family Manuscript, curiously copied by an unknown Hand sometime in the seventeenth century, which was in her Keeping from 1749.

Ruth's notes:
I purchased blanched slivered almonds which I then ground in a coffee grinder.
I mixed the ground almonds with the sugar.  Separately, I beat the egg whites in the electric mixer for 30 seconds or so.
I added one tablespoon of rose water which may have been a little too much. Try one teaspoon next time.
Then I added the almond/sugar mixture to the eggs in the electric mixer.
I put them on parchment paper on a cookie sheet to bake them.  I made them as “drop cookies”, about walnut-sized.
I convection baked them for 10 minutes at 300 degrees F for 10 minutes.  I then turned down the oven to 170 degrees F for five minutes or so.  I then turned off the oven and left them in for another five minutes or so.
Then I took them out, removed the cookies from the cookie sheets and put them on a cooling rack.
Makes about 60 cookies.
YUM!!

Preserving the Harvest, Minute Man National Historical Park
20 October 2012
Posted by The Hive at 4:35 AM