Who was Joseph Newell?

So we're officially down the rabbit hole...

My first stop was the Vital Records of Brookfield, MA for some genealogical information. (Turns out that New Braintree was not incorporated until 1751) I found out that Joseph Newell was born on July 2, 1747 to Daniel & Miriam. He married Ruth Wright on September 14, 1780, had a pile of kids, and died on December 26, 1831 at the ripe old age of 84.

Now this all started with the question of the missing years in Joseph's account book.  Well, it appears that he did go off to war in 1778. According to the Massachusetts Soldiers and Sailors of the Revolutionary War, Volume 11 there is a listing for a Joseph Newell.

I guess we'll need to return to the account book to see if the 1779 entries were made in a different hand or if we misread the dates, which was entirely possible since the writing near the edges of the pages was very difficult to read.

It would appear that prior to the war, Joseph Newell was an active member of his community. In The History of North Brookfield by Josiah Howard Temple & Charles Adams published in 1887, there is a mention that, on March 14, 1774, Town Officers were elected, and Joseph Newell, along with "Benjamin Gilbert, Benjamin Lynde, Solo. Banister, John Barrows, Amos Adams" were appointed, "hog reeves".  Seems that hog reeve is a fancy title for those responsible for ensuring that the town's porcine residents remained in their pens. During that same year Gad Williston was elected as a "warden". Who is Gad Williston? Why one of Joseph's customers.......

I wonder if the "Caleb" mentioned in these entries was a servant, as there is no listing for a son named Caleb born to Gad and his wife, Lucy. And is "your boy" a reference a slave or a son? Gad's first son was born in 1773, and unfortunately, we don't have a year noted for that entry. 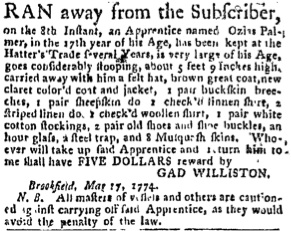 Now we know a little more about Joseph Newell -- That he went off to war at 31, married on his return and had children.  I'm sure there is more out there on him and will probably check in with Brookfield Historical to see if they have anything.  I suspect you see a pattern here. The more you discover, the more questions pop up, begging to be answered. So what if we do some checking on Mr. Newell's other customers?

Our next adventure down the rabbit hole gets really interesting, and leads to sex, murder, intrigue, a well-known Tory father-in-law, and a famous execution! Stay tuned.....