The English bedgown is the perfect article of 18th century clothing for the beginning reenactor and an essential component in the wardrobe of the more experienced.  The bedgown can be simple and humble, made out of practical linsey woolsey or quilted of white silk for the elite.  Worn for lying in, warmth, work or running away this loosely fitting garment has limited survivability for study.  One can speculate that they do not survive because they were well worn and not beautiful (always a killer), and often constructed of fabrics with an aftermarket value such as linen.

First some questions. What is a bedgown? How is the English bedgown different from the French version and why do we care?  What are the fabrics we should use?  How should a bedgown be worn?

Not to open the can of worms of semantics and the controversy of the short gown vs bedgown, one can safely say the bedgown is an upper body garment that is not tight to the torso. (How is that for a conservative statement!)  It has sleeves, and is front opening.  It can be long, so one can then assume it can be short.

The four English bedgowns that I have examined in person vary in length from garment to garment, so we should make few definite judgments based on this small sample but there were differences. The range of length of those particular garments varied from 27 1/2 inches to 34 inches.   A swing of 7 inches.  Is that enough to differentiate between a long and a short version of a bedgown?  I don't know, but my guesstimation is no.  The length difference would need to be very visible in order to merit a notation in an advertisement.

The bedgown that is the inspiration for many reproductions today is based on the diagramed version in M. Garsault's, L' art du tailleur.  The French version is boxy when laid out, with a center back pleat and side pleats.   The top of the body and sleeves are in the shape of a T. 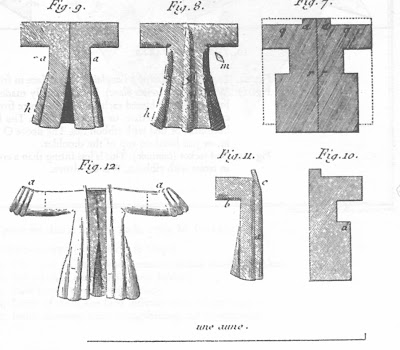 You can see the fullness over the hips (Fig 12) and the pleat at center back (Fig 8).   This diagram has been the blueprint for most 18th century bedgowns in the re-enacting community because Kathleen Kannik has meticulously interpreted M. Garsault's diagram and published a pattern.


A good pattern (the collar is tricky), it makes up into a nice bedgown. But keep in mind it is French.  In New England shouldn't our bedgowns follow the English style?  So what does the English version look like?