As we discussed in our previous post, during the mid-1770's, fashion seems to be making a transition from the the dominant stomacher front style to other gown front configurations.

Looking at some more satires and fashion plates from the mid-seventies, we are noticing what appears to be the makings of the zone front gown.  All of these prints are courtesy of the Lewis Wapole Library. 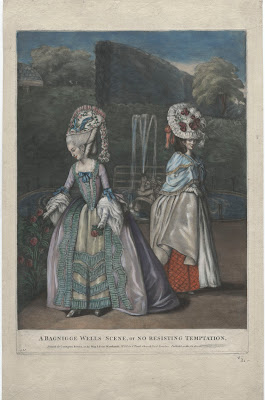 This print above,  is a 1776 fashion plate.  The woman on the left wears a gown that has trim along the robing lines and a line of ruching down the center front of the stomacher section. 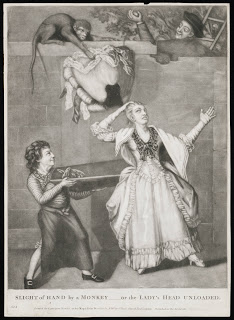 Another selection from 1776, a satire, shows what looks like an inverted stomacher (in modern lingo is what is often referred to as a "zone") with trimming on either side of the stomacher, and a line of ruching down the front similar to the previous print. 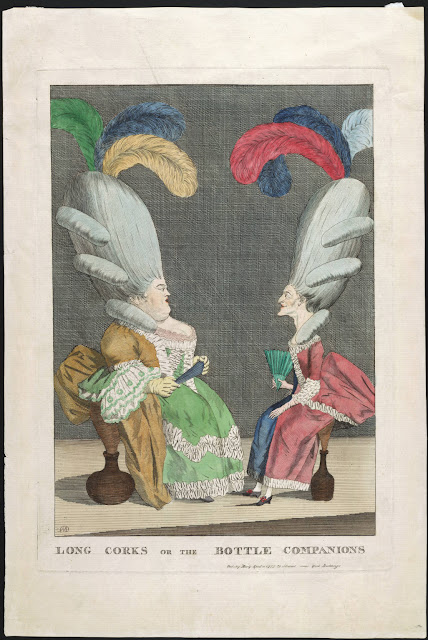 While we're making fun of fashion -- high hair and cork rumps in this case, here's a satire dated 1777, where both women are wearing gowns with ruching around the neck and down the side front openings. The front of the gown on the left bears a resemblance to the way the gown in the first print was trimmed. 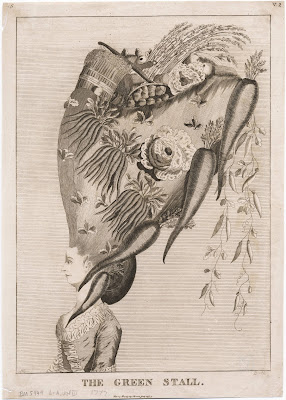 Once again, a satire goofing on big hair,  her gown appears to be some sort of zone front also with trim around the neck and down the side openings like the previous examples.
Is this the genesis of the zone front style? And/or is this new look a transition to a center front closing gown? Another thing to ponder - since three of these prints are lampooning high fashion, is the artist specifically showing new gown styles as an integral part of the satire?  Let us know what you think.
Posted by The Hive at 8:49 AM