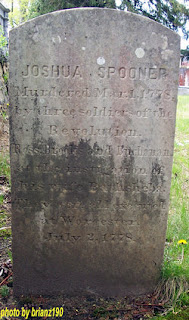 You never know where research might lead you.  Who knew that the investigation of one of Joseph Newell's customers would turn up a tale of sex, intrigue, murder and knit breeches.

On March 1, 1778, Joshua Spooner of Brookfield, MA (one of Joseph Newell's customers), was murdered by three men at the directive of his wife, Bathsheba Ruggles Spooner.  All four were tried, found guilty and subsequently hanged. 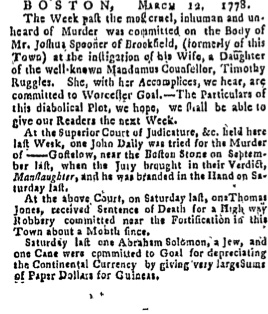 Bathsheba, the daughter of wealthy Tory, General Timothy Ruggles, married Joshua Spooner before things got politically difficult for her father, when in 1775 he pulled up stakes and shipped off to Nova Scotia.
Unhappy in her marriage, Bathsheba had an affair with a teenage soldier, Ezra Ross, who she and her husband had taken in.  She somehow convinced her lover (who had got her pregnant) and two British army deserters, William Brooks and James Buchanan, to kill her husband. The unfortunate Mr. Spooner ended up bludgeoned to death and his body thrown into a well.

A quick google search for Joshua Spooner lead to this story of his untimely death.  But while digging deeper, I discovered some other things that were interesting from a clothing standpoint - and that was the original point of this exercise.  In a book written in 1844 by Peleg W. Chandler (a member of the American Antiquarian Society and Bostonian Society) entitled, "American Criminal Trials Volume 2", Chandler retells this sordid tale, based on the transcripts from the trial along with period newspaper accounts.  (By the way, it's a great read and also contains several other legal cases, including the trial of Major Andre.)

According to witness testimony, William Brooks, one of the British soldiers who murdered Mr. Spooner, was seen wearing "a pair of black knit breeches and a cloth jacket with metal buttons" when apprehended. A woman staying at the Spooner's house told the court that the night of the murder, she was asked by Mrs. Spooner to go upstairs and get "a pair of black knit breeches".  And a witness named Charles Simson, testified that he recognized the jacket Brooks was wearing, as one he had altered for Mr. Spooner.  (Guess Mr. Spooner had to find a new tailor since Joseph Newell had just joined the army.)  Another witness sees Ezra Ross (Bethsheba's lover) putting on some of Mr. Spooner's clothes and Bathsheba throwing Mr. Ross's blood covered breeches into the fire.

It's no wonder these four were convicted!


Returning to the clothing aspect for the moment, we have now seen knit breeches being made and worn in New England, from as early as the 1760's to 1778, and might argue that we, as living history interpreters, need to figure out how to reproduce what appears to be a relatively common item of clothing - knit breeches. But that's a discussion for another day. In the meantime, you may want to read "Mr. Mann's" post on the subject.


From 1760-1771, Joseph Newell makes the following entries in his ledger. I'm sure he never could have imagined that just after he would march off with the Continental Army, his long standing customer, Joshua Spooner, would be found dead in a well at hands of three soldiers, one American, the other two British deserters, according to a plan masterminded by the wife he had married in 1766. 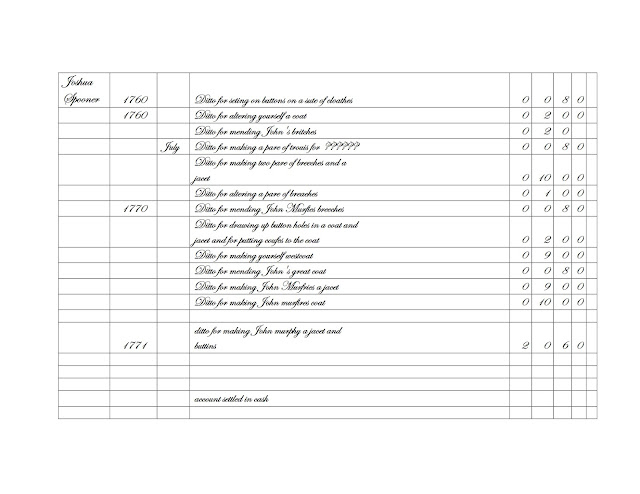